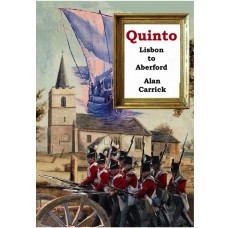 In spring 1808 a young member of a trading family, Henry van Zeller, finds that his pyrotechnical studies at the Lisbon Academy of Sciences attract unwelcome attention from the invading French authorities and decides to leave. This is an account of his journey through an increasingly war torn country and his mounting involvement with national and international intrigues.

(From the author, about Aberford:)
"Aberford, says Wikipedia, is a large village on the eastern outskirts of the City of Leeds in West Yorkshire, England."
It has a population of 1,180 according to the 2011 census: it has probably been about that size for several hundred years.

Aberford was considered to be the midway point between London and Edinburgh, being around 200 miles distant from each city and lying on the ancient Great North Road. When I moved there in 1953 I characterised it as being "about a mile and a half long and one house thick..." and thought that The Road was everything there was to the village, and whilst this is in some ways true, there is much more than that: the parish church, for example, is dedicated to St Ricarius - not St Richard as sometimes stated - the only one in the country with this ascription. It has a pub, The Arabian Horse, again with a unique name. The Road, as part of the Roman ridgeway leading to Calcaria (Tadcaster) and Eboracum (York) punches a hole through ancient Brigantine earthworks near the village green, and just to the south, neatly quartering the village, flows the Cock Beck which less than a mile downstream flowed with blood after the Battle of Towton.

In the churchyard, along with the monuments to the great and good of the village, there used to stand, near the porch, a headstone which read: "Henry Van Zeller, born at Oporto October 15 1787, died at Abberford January 31 1810, Aged 23 Years" If this attracted any attention at all, it used to be because of the spelling of the village name, an example of evolution at work, maybe. The stone was moved sometime in the 1970s or so when the churchyard was "tidied up" and now stands against the rear wall near the door to Church House and an old rock-cut sarcophagus.

For many years questions as to why a young Portuguese should die thousands of miles away from home rumbled away at the back of my mind - who was he? why, since he was presumably a Catholic, was he buried in the church yard? (there is a Roman catholic church in the village) what was the link to Porto? So in 2002 I decided at last to visit Porto and find out. This is the result."

(From Wikipedia, a definition)

Creative nonfiction (also known as literary nonfiction or narrative nonfiction) is a genre of writing that uses literary styles and techniques to create factually accurate narratives. Creative nonfiction contrasts with other nonfiction, such as academic or technical writing or journalism, which is also rooted in accurate fact, but is not primarily written in service to its craft. As a genre, creative nonfiction is still relatively young, and is only beginning to be scrutinized with the same critical analysis given to fiction and poetry.

The non-fiction novel is a literary genre which, broadly speaking, depicts real historical figures and actual events woven together with fictitious conversations and using the storytelling techniques of fiction. The non-fiction novel is an otherwise loosely defined and flexible genre. The genre is sometimes referred to using the slang term "faction", a portmanteau of the words fact and fiction. Truman Capote was one of the first authors who was recognized for nonfiction novel writing.


Your Review: Note: HTML is not translated!

Enter the code in the box below: